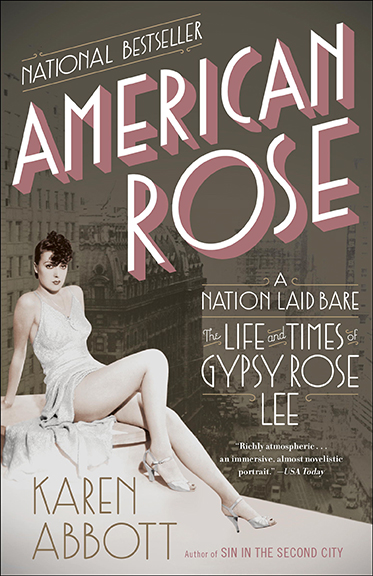 Book Description
American in the Roaring Twenties. Vaudeville was king. Talking pictures were only a distant flicker. Speakeasies beckoned beyond dimly lit doorways; money flowed fast and free. But then, almost overnight, the Great Depression leveled everything. When the dust settled, Americans were primed for a star who could distract them from grim reality and excite them in new, unexpected ways. Enter Gypsy Rose Lee, a strutting, bawdy, erudite stripper who possessed a preternatural gift for delivering exactly what America needed.

With her superb narrative skills and eye for compelling detail, Karen Abbott brings to dramatic life an era of ambition, glamour, struggle, and survival. Using exclusive interviews and never-before-published material, she vividly delves into Gypsy's world, including her intensely dramatic triangle relationship with her sister, actress June Havoc, and their formidable mother, Rose, a petite but ferocious woman who seduced men and women alike and literally killed to get her daughters on the stage.

American Rose chronicles their story, as well as the story of the four scrappy and savvy showbiz brothers from New York City who would pave the way for Gypsy Rose Lee's brand of burlesque. Modeling their shows after the glitzy, daring revues staged in the theaters of Paris, the Minsky brothers relied on grit, determination, and a few tricks that fell just outside the law—and they would shape, and ultimately transform, the landscape of American entertainment.

With a supporting cast of such Jazz-Age and Depression-era heavyweights as Lucky Luciano, Harry Houdini, FDR and Fanny Brice, Abbott weaves a rich narrative of a woman who defied all odds to become a legend—and whose sensational tale of tragedy and triumph embodies the American dream.

"Sad, smart, brassy... the true story of the Queen of Burlesque is even weirder and wilder than the legend."


"The best biographies do more than detail the life of a subject—they completely embed the reader in that person’s life and mindset. They combine tenacious reporting with writing that belongs to a first-rate novelist. American Rose is the rare biography that captures the imagination and doesn’t let go. It would scare the bejeesus out of Gypsy Rose Lee, and it’s guaranteed to enthrall readers."

"Compelling... the dark side of the dazzling life."

"With staggeringly in-depth research—and never before uncovered details about Gypsy Rose Lee’s life—Karen Abbott composes a story wrought with personal drama and insight into a dark era in American history. All the while, she never betrays Gypsy’s bawdy, whip-smart edge. (One chapter opens with a quote from controversial director Otto Preminger: 'I only fucked Gypsy Rose Lee once.') The story is as beguiling as it is surprisingly timeless. As Eleanor Roosevelt once said to Gypsy: 'May your bare ass always be shining.' "

"Karen Abbott unfolds Gypsy’s life story as a microcosm of 20th-century America, with a backdrop of Prohibition, the Depression, and both World Wars… enormously entertaining. The book, like its subject, is pretty sensational stuff."

"Not just the queen of burlesque, [Gypsy] was 'Dorothy Parker in a G-string,' as Karen Abbott dubs her in her rollicking new biography... which, through exhaustive research and new interviews with Gypsy's son and sister, peels away a few more shimmering layers to get to the woman behind the mystique."

"[American Rose] documents not only the ravenous nature of Gypsy's ambition but the people, places, and times that made its realization possible."

"Abbott creates a brainy striptease similar to the one her subject may have performed."

"At its core, American Rose is a haunting portrait of a woman... offering her audiences a sassy, confident self while making sure they would never know the damaged soul who created her."

"Imaginative and engaging… Abbott shares some fresh, intimate details as she develops two parallel narrative strands: the hand-to-mouth early years when Rose was plying the city-to-city vaudeville circuit with her child acts featuring her talented daughter, June, and the more gawky, reliable Louise; and the steady success of the Minsky brothers on the Lower East Side of New York City as they invested in a string of vaudeville theaters that gradually morphed into wildly successful burlesque houses. When June ran away (at age 13 to get married), Rose reinvented Louise as her last vestige of hope–and thus Gypsy Rose Lee made “her delicate, unclean break from the past.” Abbott’s work, cutting fluidly between decades and recreating dialogue, captures this dizzying, sullying, transformative era in America."

"Abbott writes in a propulsive, witty style, jumping back and forth in chronology and limning a vivid portrait of Gypsy Rose Lee’s milieu, lovingly rendering the Tammany Hall politicians, gangsters, Algonquin Round Table habitués and theatrical promoters that constituted Lee’s world. Running concurrently with Lee’s story is that of the Minsky brothers, whose burlesque house became a New York institution and served as the setting for the introduction of Gypsy Rose Lee, the teasing, intellectual beauty with the razor-sharp instinct for what to reveal and what to hide. Lee’s success—she would publish novels, act in films and write an autobiography that would serve as inspiration for one of Broadway’s most enduring triumphs—was sweet, but Mama Rose, long after her death, would haunt her daring daughter to the grave. A fast-paced, funny, flavorful reckoning with a unique American icon."

“Gypsy Rose Lee — Vaudevillian, stripper, writer, public figure, provocateur — lived a life that seemed utterly open and free. America thought they knew this complicated woman, whose story was told again and again on stage, screen, and page. But as Karen Abbott shows in her wonderful new book, Gypsy Rose was an intensely hidden, damaged, and brilliant star who almost no one really knew. American Rose is a fitting tribute to an amazing woman, telling her story beautifully while revealing as much about post-Depression America as it does about celebrity life. It’s cultural history at its best.”

“The story of Gypsy Rose Lee is the story of America itself: tumultuous, daring, devastating, thrilling, and relentlessly self-inventing. I was fascinated by Gypsy’s unusual power—over men, over women, over anything with breath in its body—and how creative she had to be, in 1935, to sell sexy without actually selling sex. Karen Abbott combines meticulous research with narrative drive to create a gripping page-turner that belongs on the shelves of history buffs and fiction fans alike.”